My little people have been calling our canyon the Hundred Acre Wood. Ed and I find Winnie the Pooh awfully annoying, sorry Mr. Milne, but all three kids love the stories. (We found a whole bunch of vintage A.A. Milne in a free box once at a used book sale, before both of us had decided we're not big fans of The Bear.) 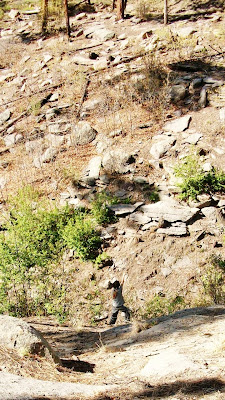 "Did you ever stop to think, and forget to start again?"
-Winnie the Pooh

Anyway, Isaiah discovered a canyon that connects to ours at a sharp angle, with a somewhat hidden entrance, which he christened Heffalump Hollow. He reeeeally wanted us all to take a visit, so we went early this morning.

"I like nonsense, it wakes up the brain cells. Fantasy is a necessary ingredient in living, it's a way of looking at life through the wrong end of a telescope. Which is what I do, and that enables you to laugh at life's realities."
-Theodore Geisel (Dr. Suess)

John Paul was really looking for elephants and vacillated between excitement and terror. 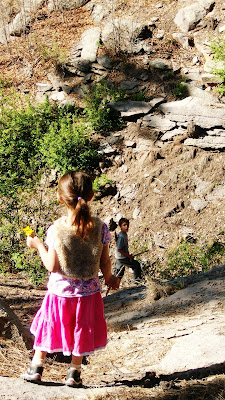 "Never tell people how to do things. Tell them what to do and they will surprise you with their ingenuity."
-George Smith Patton, War as I Knew It, 1947

When we found the Hollow, Isaiah proceeded to take us down a nearly sheer rock face and John Paul and I nearly tumbled to our deaths. I was already a bit cross and I really grumbled it up then. (Rock climbing in volcanic dirt is not the favorite activity of most 6-month-pregnant ladies.) We made it safely back up the rocks and I insisted Isaiah find a safer way in for us all.

"You can't depend on your eyes when your imagination is out of focus."
-Mark Twain

"Personally, I would sooner have written Alice in Wonderland than the whole Encyclopedia Britannica."
-Stephen Leacock

So I sat in the shade on the edge while the three of them scrambled about. It was a beautiful hidden place, quite wet from a recent rain. 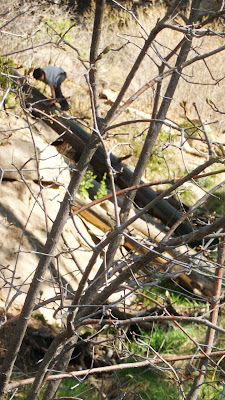 "Trust that little voice in your head that says "Wouldn't it be interesting if..." And then do it."
-Duane Michals, "More Joy of Photography"

Our little adventure segued into a botany lesson when I realized I was sitting near several green patches, any of which might have been poison ivy, only I couldn't quite recall what it looks like....

So the hunt was cut short and we booked it home. I stripped everyone and started the washer (extra soap, hot water!) and we all showered, in hot water, with plenty of lavender castile soap. Then we all looked on the computer and we decided not only did we see poison ivy on our hike, but actually our canyon has been full of it for weeks.

Maybe it's a good look-alike, but our pediatrician did warn us recently that our particular canyon tends to be full of it during the spring. Maybe we have a natural immunity or something! I know we do to poison sumac, which grew THICKly in our old yard. Our neighbors were deathly allergic but we found it excellent for crafts, all those nice bendable stalks! 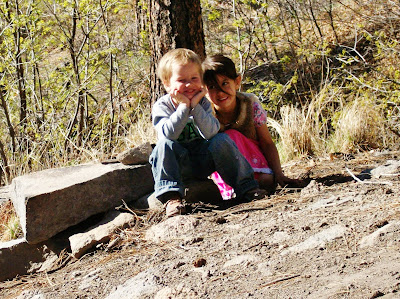 "The hardest thing about reality is returning to it after an hour inside your child's mind."
-Robert Brault, www.robertbrault.com

I think I'll let the children go back to lizard hunting and observation, which has been a favorite activity this week. Most are docile but their most recent catch was an angry biter. Both Rosie and Isaiah were covered with suction-bite marks (they don't actually have teeth) and they mostly deserved it! Better harmless lizard bites than a family outbreak of poison ivy, I'd say.

"I never did very well in math - I could never seem to persuade the teacher that I hadn't meant my answers literally."
-Calvin Trillin

We're all designing some woodworking plans this week, which is great because it involves a lot of math. Isaiah really enjoys math when it results in tangible THINGS, like a new train table. Ours is decades old and has been repaired many times, but it's on its last leg. So when Ed found a bunch of nice waste pine at work, we decided that would be our next family wood project. (All three of our kids play with their wooden train set every day, hours if it is raining.) 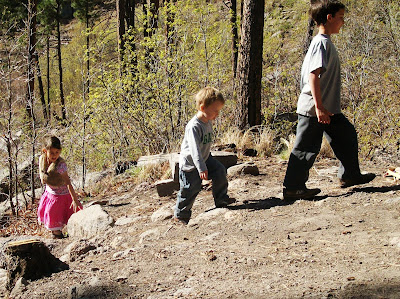 "You have to have an idea of what you are going to do, but it should be a vague idea."
-Pablo Picasso

Anyway, several hours have passed and no one is complaining of itchiness, so that's a positive. Hope you and your little people have a great week! 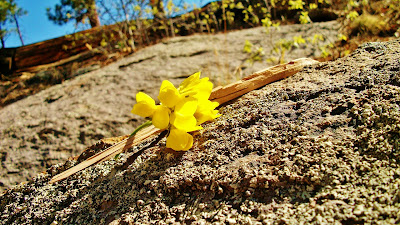 "Whoever wants to understand much must play much."
-Gottfried Benn

Posted by Breadwithhoney at 12:46 PM