What is going on over here?

Mostly it's the nausea, partly it's the depressing weather. Little cooking, little interesting homeschooling, little of anything but lyin' around feeling sorry for myself taking it easy.

But this week it's because my poor little man 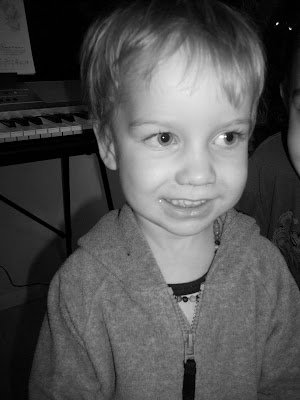 had an accident. I was going to take pictures of it, but I can't; it is just too sad-looking. His big sis very accidentally pulled a bench down on his toe as they were getting down from the table and it landed on his sweet, perfect little big toe.

It looked nearly severed and was bleeding profusely. We rushed to the ER- as in, the poor kid was only wearing underpants and a shirt and it was 30 degress outside.

He had to be heavily sedated because he was inconsolable- wouldn't even nurse. The tendons were intact, but the toe was broken, and my two big kids sat and watched the whole thing. Because of course their Dad was out of town that night.

I think that ended up being a good thing because they were so worried and the doctor and nurse did a wonderful job explaining everything they were doing. They gave them pieces of fiberglass splint to feel and told them about the difference between sedatives and locals, both of which John Paul received. It took 7 internal and 10 external stitches (on a digit just 1.5 inches long!) to close the wound. Then it took 2 hours for the poor kid to wake up from the sedative (it should have taken 10 minutes). Making for a total ER trip of 4.5 hours.

So we are mostly lying in bed with him, keeping him comfy and distracted from the enormous amount of pain he continues to be in, despite some pretty serious painkillers he's on. I'm still nauseous and tired and the house is pretty much a wreck. My big kids are acting like saints and, boy, they are learning a LOT!

So much for sugarless sugar cookies. Sorry about that. Next year- I promise.

Well, back to waiting for Ed to bring me my shrimp. You know how it is, one moment everything is fine and the next moment the world stops till I've had shrimp. Pregnancy- sigh.


"Children are a great comfort in your old age - and they help you reach it faster, too."
~Lionel Kauffman
Posted by Breadwithhoney at 5:34 PM