In which case, I guarantee you, it is not a black widow!

Because once you've seen this: 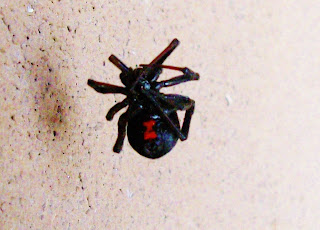 You never have that thought again.  You just look and know, that is a black widow, or, nope, not even close.

Well, this pregnancy, I keep checking my baby, thinking, "Is she breech?"

And I know if I have to ask is  she breech, that she's not breech.  Till today, when I woke up on my left side, looked down at my belly and went, "Expletive, expletive, THAT is a breech baby."

Sigh.  I knew things were going too well.  I'm also sure the extremely stressful weekend I just had contributed.  First, we sold our house.  Of course, we sold it for a lot, a LOT, A LOT  less than we wanted.  And then we found out we won't get a trip to Omaha (Oh, I can finally tell you now that we are moving to Omaha, because Ed finally signed his contract) to house hunt, (which is fine, I guess, since we wouldn't be able to spend as much on a house as we were expecting, having sold our Kansas house for peanuts,)  then I spent a couple hours looking at rentals on the internet and finding pretty much nada.  Then we hosted a childbirth class, after which I let 2 doulas palpate my belly.  One went really deep causing baby and me to JUMP, and causing a uterine spasm (which I hid because I didn't want her to feel bad).  Then we went swimming and I strained a muscle in my hip.  And the next day, yesterday, I spent 8 hours packing and dragging heavy boxes.

And I flipped out at my husband over a doughnut fiasco.

So somewhere in there, amidst the stress  and strain, this baby got uncomfortable and turned around.  (Today, baby is hiccuping and moving in a weird way she's never done before.)

Today I have spent the morning doing excercises and greedily (re)reading the Spinning Babies website.  And crying.

And now I think I will resume both activities.


"Life is tough enough without having someone kick you from the inside."
~Rita Rudner
Posted by Breadwithhoney at 10:30 AM