What the Heck is a Sea Vegetable?

Sea Vegetables
What is a sea vegetable? Just a fancy name for seaweed. Because unimaginative people might think- yuck, who wants to eat a weed? But you and I, dear reader, know better. 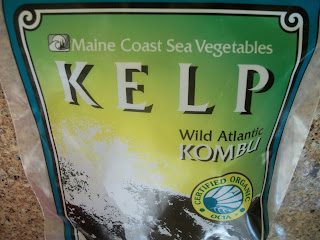 Sea vegetables come in many varieties: dulse- highest in iron, nori- used for sushi but also delicious toasted and crumbled on anything, hiziki- richest in calcium, arame- very mild and a good intro to sea veggies, and, my personal favorite, kombu. The standard American diet is notoriously low in iodine, and the iodine in your table salt is not as readily absorbed as the iodine in sea vegetables. You need bio-available (that is, easy to absorb and assimilate in your body) iodine for proper thyroid function, toxin excretion, and metabolic regulation. Not to mention good energy levels. Not to mention healthy fertility!

In fact, my doctor insisted on checking my iodine level during pregnancy #3, as he had attended a seminar on the importance of sufficient iodine for pregnant women a few months previously. And every single one of his patients tested since had been extremely deficient. I assured him mine would be fine because I eat kombu all the time, but told him to go ahead and check anyway. When the results came back he raised his eyebrows and laughed, “What did you say you were eating?” “Kombu. Comb-oo.” “OK, well, keep eating it! Your iodine levels are high, as high as a Japanese woman’s.”

is probably the easiest sea vegetable to use, which is why I’m going to focus on it here. Kombu contains, in addition to iodine, appreciable amounts of calcium, magnesium, iron, B6, and chromium. Also, the calcium to magnesium ratio is 1:2, considered by a growing number of nutritionists, including Marilyn Shannon, author of Fertility, Cycles, and Nutrition, to be much healthier than the usual 2:1 ratio found in most vitamin supplements today. The simplest way to use kombu is to toss in a piece whenever you cook with liquid- beans, soup, rice, and so on. Here is a pot of pinto beans, which had a strip of kombu added early in the cooking. 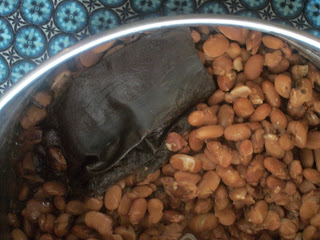 The kombu has expanded and released its minerals into the water, which was then absorbed by the beans. These super-charged beans are now ready for casseroles, burritos, or whatever.

Here is a grass-fed roast with a strip of kombu on top: 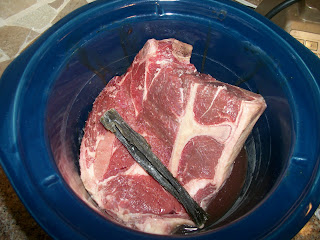 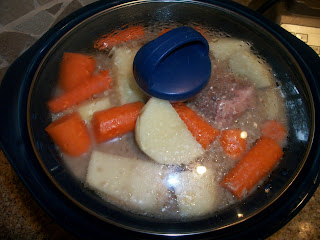 The roast will be simmered all day with organic potatoes, carrots, and chicken broth.

Maybe not for the sea veggie neophyte, kombu can also be eaten raw for a salty snack. Right now I am chewing thin shreds as I write. It’s an acquired taste, for sure. Ever binge on sugar? Sugar depletes your body of many of the minerals found in sea vegetables, so eating kombu or nori or any of the sea veggies after a sugar binge helps your body recover and decreases the immune system repression associated with over-consumption of sugar. Sea vegetables can be found in any health food store or Asian market and should be stored in an air-tight container in a dark cupboard.

I just finished my whole strip of kombu. I’ll let you know if I feel super-energized tomorrow....


"The greatest delight the fields and woods minister is the suggestion of an occult relation between man and the vegetable. I am not alone and unacknowledged. They nod to me and I to them."
-Ralph Waldo Emerson
Posted by Breadwithhoney at 8:10 PM